“As we search the length and breadth of America for shooting locations, we are drawn to roads that lead the eye but are then halted by something monumental. This formula offers a closed end theatre from which to tell stories.

The best urban example of this is perhaps La Salle Street in Chicago, which concludes with the Chicago Board of Trade. It is one of the most iconic views in any American city and, of course, Chicago is the showcase of American architecture. Sam Mendes made full use of this in “The Road to Perdition”.

Forrest Gump Point in Monument Valley is the American West at its majestic best and offers the same narrative of a journey’s end, albeit amidst the towering monoliths of Arizona.

But perhaps my favourite setting for this box office effect is the old mining town of Telluride resting at 9,000ft in the mountains of southwestern Colorado.  I would contend that looking east down Main Street on a clear day is one of the most visually thrilling sights in all of America. There is a timelessness to the street with the grandest and most imposing of backdrops.

Of course, Telluride is now a glamorous Ski resort and my instincts were to shoot here in the winter; the mountain pops with the snow and if the weather cooperates, there can be the whitest of canvases to play with at street level.

The problem for film makers is that the main street of Telluride can only be shut off from the public on a Sunday morning and only then for a couple of hours. We arrived on set a few days before and the weather got warmer and warmer. The snow in Main Street became slush and then disappeared totally.  Saturday was spent sunbathing and cursing our luck, but then at about 5pm, storm clouds started to gather and by 8 pm, there was a full-on blizzard.  We were overjoyed, but also concerned that if the storm continued until the morning, the mountain would be hidden and the moment lost. Without the mountain, there is no picture.

At 6.45 am, with the team in position, some breaks appeared in the cloud and then around 7.15 am, I had my moment. We could not have wished for more.

This picture is up there for me. Perhaps luck is, indeed, the residue of design.” – David Yarrow 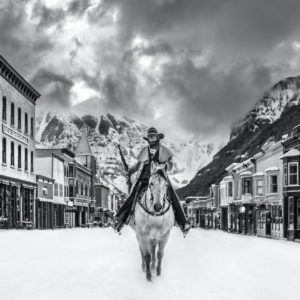