View cart “Emma, Dinokeng, South Africa” has been added to your cart.
← PREV
NEXT →

“The Big D – is exactly that – a big and great city in the big and storied state of Texas. Dallas holds a special place in my heart – there is a palpable warmth of hospitality and a spirit of collaboration. We enjoy Dallas as much as we enjoy any city in the world.

Our question has always been what to photograph in the city. To tell a story that does not emphatically reference its associations, would seem lame. For so many, Dallas means cowboys and we struggled to get away from that concept. We just had to include cowboys.

The question was how to evolve from that simple premise. My view was that cowboys come with cattle and if we were to use cattle, we may as well go for prize winning longhorn cattle. After all, they are the emblematic animal of the Lone Star State.

I was fortunate to find great support from Shawn Todd, whose eponymous firm is redeveloping much of the East Quarter in the city. The view from this district toward

the city centre offers the best skyline. Shawn has done so much for the city and the strength of his relationships with the Mayor and the police and the traffic department meant that we could close down this part of the city on a Sunday. That’s a key piece in the jigsaw.

This photograph was still far from easy to execute as I needed everything to be in the right place for the layered narrative to work. Longhorn cattle are not easy to get in the right place – even with the very best cowboys working them.

This final image is as good as we could have imagined. The sign on the right locates the photograph for ever. This is Dallas, Texas y’all.” – David Yarrow 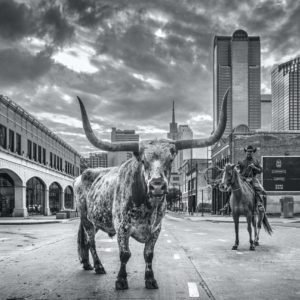