Dana Gluckstein is recognized as one of the preeminent portrait photographers of her generation. Her vision is most vividly revealed in her images of indigenous peoples. Not content with merely revealing a physical likeness, her work expresses the character and moral quality of the sitter while also imparting upon her subjects a sense of their dignity. Her work beautifully exemplifies a humaneness lacking any temporary or accidental quality.

Gluckstein’s photographic essays began in 1983 when she was on a commercial assignment in Puerto Rico. At the last minute, she decided to take a flight to Haiti to create portraits of local people which became a pivotal moment in her career. When she came upon a Haitian woman smoking a pipe, Gluckstein was instantly drawn to her.

As she says, “It was very late, almost nighttime, hardly any light, and my intellect was chattering away saying, you’re never going to get it, it’s not going to be sharp. But something in me was so moved by her presence that I did it.”

The resulting stirring image began a passion of photographing the indigenous peoples who comprise six percent of the world’s population. Gluckstein has been photographing with a 1981 Hasselblad camera for over thirty years because of its weighty design and high-resolution square negative which lends itself to capturing the natural light that suffuse her insightful images.

She comments: “The ability to capture time standing still, to witness the eternity that resides in a moment, is what I strive to achieve in a portrait session and the resulting images. Paradoxically, in that present moment caught on film, past and future moments merge. The act of creating an image becomes a ritual, a holy act that also allows the viewer to transcend time. Over the decades, I have photographed indigenous peoples fighting for their lands, their traditions, their languages, and their very lives.” 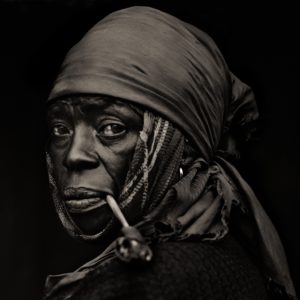