Signed and print dated on recto. Artist label on verso. Numbered from edition of 25.

Penelope Tree, a prominent fashion model in London’s swinging 60’s, was first photographed by Diane Arbus when she was thirteen years old. In 1966, she attended the Black and White Ball thrown by author Truman Capote and attracted the attention of Cecil Beaton and Richard Avedon who worked together to make her a supermodel. Clive Arrowsmith photographed Penelope Tree in 1971 and portrayed her just as her name describes: as a tree. The image focuses on the model’s neck and face, as they are the only parts of her body visible within the frame. Her eyes gaze directly into the camera with a subtle intensity as her face and hair grow tall into a tree like form, with a bird’s nest perched atop the “leaves.”

The picture is striking due to its unconventional composition, yet it reflects Penelope Tree’s unparalleled beauty with a photographer’s intuition. Penelope, describing her time spent photographing with Clive has stated that he has, “crazy wisdom as a photographer,” and that his work, “reflects humour, insight, and a big heart.”

This image became one of Penelope Tree’s favorite photographs taken of her.

Clive Arrowsmith believes “style is engrained in your visual literacy” and that a photographer’s use of color, light and shadow is always unique. With a definitive style, sometimes quirky, sometimes classic, but always original, Clive Arrowsmith creates photographs that have transformed fashion and pop culture. His images of models and celebrities are globally admired, and he has solidified his place in contemporary photography. 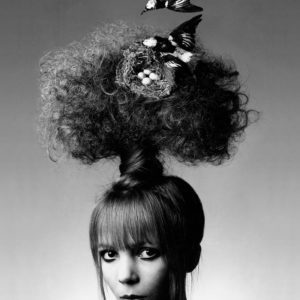