In 1935 during the Great Depression in New York City, photographer Barbara Morgan joined creative forces with the modern dance artist Martha Graham. They would produce a series of photographs that would forever redefine their respective disciplines. Barbara Morgan, who originally taught design and printmaking at the University of California, Los Angeles in the 1920s, eventually became convinced that the medium of photography could have equal expressionistic aesthetic qualities as graphic art.Five years after she and her husband relocated to New York City in 1930 and she decided to fully dedicate her time towards the medium, Morgan attended one of Martha Graham’s dance performances. She was instantly struck by the historical and artistic importance of the emerging American modern dance embodied by the company. That same day, Morgan went to introduce herself to Graham and the two decided to embark upon a collaborative effort while also beginning a relationship that would last over six decades. The photographer’s philosophical and aesthetic sensibilities, her intuitive understanding of dance as an “eloquent life force,” and her experience of the Native American dances in the Southwest corresponded with the pioneering efforts and ideas of Graham and her dance troupe.

As Morgan observed: “The other photographers and painters who dealt with the Depression, often it seemed to me, only added to defeatism without giving courage or hope. Yet the galvanizing protest danced by Martha Graham and others was heartening. Often nearly starving, they never gave up, but forged life-affirming dance statements of American society in stress and strain. In this role, their dance reminded me of Indian ceremonial dances which invigorate the tribe in drought and difficulty.”

Morgan began photographing Graham and her company in the controlled setting of her studio and not during public performances. The photographer was chiefly concerned with most effectively converting their spirit to photography’s two-dimensional and static state. She aimed to translate the essence, energy, and emotion of the dances by capturing the single moment of their visual peaks. Although Morgan’s negatives were particularly challenging to develop, she became a virtuoso printer and enjoyed developing them in a darkroom herself.

In 1941, Morgan produced a seminal book entitled, “Martha Graham: Sixteen Dances in Photographs” with the most iconic image emerging as “Martha Graham: Letter to the World (Kick).” For this image, it required the dancer to repeat a single kicking sequence that was a part of her 1940 performance based on the love life of American poet Emily Dickinson. The dancer embodies Dickinson through the juxtaposition of energetic and retracted actions, while the depicted movement of the dancer’s bodily swirl symbolizes the transcendence of the poet’s personal tragedy. Astonishingly timed, Graham’s face is caught in a moment of strained yet controlled emotion with the dancer’s somewhat rigid arms contrasting with the rhythm and energy of her seemingly effortlessly flowing dress. The interplay of space, shadow, figure, and movement crystallizes into a climatic expression of the power of the dance.

Today, her work can be found in the collections of the Metropolitan Museum of Art in New York and the Museum of Modern Art in New York among many others. “Letter to the World” remains an unmatched testament to the beauty and grace of dance and photography, as well as a symbol of the enduring power of the human spirit. 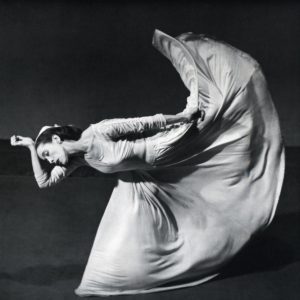