André Kertész was a central figure in expanding the language of modernist photography. Neither a Surrealist nor a strict photojournalist, he nevertheless combined a street photographer’s eye for the decisive moment with the formal aesthetic of a modernist. Kertész was Hungarian and arrived in 1925 to Paris, the center of the art world, after giving up a career as a stockbroker.

He made a fresh start in the city knowing no one and without gainful employment. Within a year and a half he was selling his photographs, such as “Satiric Dancer” to illustrated magazines in France and Germany and was building a very creditable reputation as a significant artistic figure in photography. Kertész would also develop a circle of like-minded artist and writer friends with the De Stijl painter Piet Mondrian among them. At that time, Mondrian was writing an article on his philosophy of neo-plasticism, which renounced all representational elements in painting for a concentration on greatly reduced vocabulary of line, space, and color. Mondrian argued neo-plasticism was also a model for creating an ideal harmony between man and his environment as embodied by his own studio. Kertész would photograph the painter’s studio several times throughout 1926 during which he would begin to engage his own photographs in a sophisticated dialogue with Mondrian’s art and ideas.

As Kertész later recalled: “I went to his studio and instinctively tried to capture in my photographs the spirit of his paintings. He simplified, simplified, simplified. The studio with its symmetry dictated the composition. He had a vase with a flower, but the flower was artificial. It was colored by him with the right color to match the studio.”

In the celebrated image, “Chez Mondrian,” the viewpoint is from inside Mondrian’s studio, but looking out into the adjacent hallway. Kertész photographed the intersection between the painter’s carefully controlled interior environment and the often unruly exterior world. Although Mondrian imposed rigid geometric order on everything in the apartment, Kertész found deviations in the curves of the staircase, vase, and the round boater hat. The diffused light that enters the room seems almost like a mystical force which reveals one object that was antithetical to Mondrian’s artistic practice: a tulip whose offending green leaves the artist had painted white. “Chez Mondrian” has become, on a formal and aesthetic level, a supreme example of a unique balancing of light, shadow, line, and volume. It also embodies the essence of the most important abstract painter in Paris and signifies a new, experimental direction in Kertész’s work.

The image is included in the collections of the Art Institute of Chicago, the Metropolitan Museum of Art in New York City, and the Museum of Modern Art in New York City among others. Kertész would go on to create other seminal, modernist photographs, but none would eclipse “Chez Mondrian” in terms of the pared down, yet elegant composition which uniquely captured the zeitgeist of 1920s Paris. 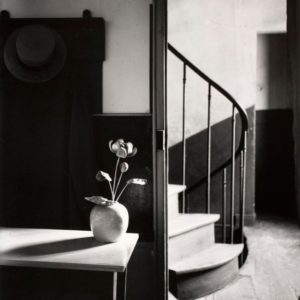