1993, Printed 2016
Uniquely toned Archival Pigment Photograph from the reverse side of a Polaroid negative. Face mounted to acrylic (Diasec)
56
x
42
in

Albert Watson‘s photography bridges interests in portraiture, fashion and popular culture. Born in Edinburgh Scotland, he moved to the U.S. in 1970 and immediately began a career in commercial photography. He has produced a fresh, insightful, and amazingly rich body of work, with over 100 covers for Vogue and 40 for Rolling Stone under his belt. His versatility in different mediums, having also made films, is evident in his photography. Whether he is shooting portraits, fashion pictures, or iconographic images of popular culture, his photographs creatively use devices like repetition, fragmentation, and elliptical framing to invent new takes on his subjects. His photographs range from artistically beautiful and refined to raw and edgy, but always original. During a presentation at Adobe Max 2018, Watson gives an overview of his career and behind-the-scenes stories about some of his most famed shoots.

After a photo session in Marrakech for German Vogue, Albert Watson took this photograph of Kate Moss on her 19th birthday in 1993. The impromptu photo-shoot took place mid afternoon and portrays a young and innocent Kate nude. Curled up and turning away from the camera, Moss modestly covers herself as she rests delicately atop the sand, her hand gently touching her slender frame at the shoulder. Throughout his career, Watson has always pushed the boundaries by using a variety of printing processes and experimenting with different materials. In this picture he used the backside of a polaroid, which he scanned at a high resolution, to create a brand new photograph. The film stock and Polaroid camera are now little used, but Watson was able to transform the polaroid he took of Moss, with the help of modern technology that was not available at the time, to create a Chromogenic print. The scanned image reveals the borders and chemical emulsion that was left after the original polaroid image was pulled apart, acting as a frame within a frame, and becoming part of the final image.

Using this same process, Watson conceived what he called “The ‘Roids,” creating a series of photographs that capitalize on the same aesthetic. His image of Kate Moss is prominent for its size, presentation, and pointillist structure. Stylistically soft focus and with an apparent ghosting of her body, this image separates itself from many other pictures of Kate Moss, who is one of the most photographed models in the world. Her fragility is complemented by the photograph’s pictorial qualities, from the softness of the grain to the warm sepia tone. The framing of the final picture is clean, sleek, and minimal. Watson intentionally recreated the shape of the original polaroid with the design of the frame’s hard edge.

Albert Watson has been the recipient of many honors and awards for his visionary work. Over the years he has received a Lucie award, honoring great achievements in photography, a Grammy, three Andys, a Der Steiger Award, a Hasselblad Masters Award, and the Centenary Medal, a lifetime achievement award from the Royal Photographic Society, and was also awarded an Order of the British Empire by Queen Elizabeth II for his lifetime contribution to the Arts. He has also had numerous museum and preeminent gallery exhibitions. This photograph, in particular, is more than a portrait or a fashion picture, it is an iconic photograph of a young Kate Moss, a model who steps in front of the camera and commands the shot, taken by one of the most inventive photographers in contemporary photography. 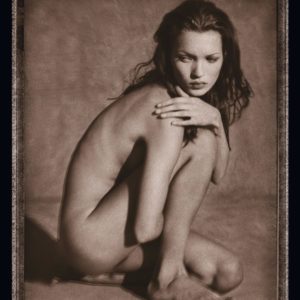 Uniquely toned Archival Pigment Photograph from the reverse side of a Polaroid negative. Face mounted to acrylic (Diasec)