For the art director and fashion photographer, documentary representation is less important than an overall atmospheric, pictorial effect. The unique haute couture designs in Naundorf’s work result from privileged access to the archives of premier haute couture houses. Chanel, Dior, Valentino, Lacroix, Armani, Saab, and Gaultier have all opened their doors to Naundorf. As the artistic director for each of her shoots, she constructs interesting “mise-en-scenes.” These mise-en-scenes take place in either historic, cultural, architectural, or garden settings in cities around the world. Naundorf ultimately creates mysterious and beautiful tableaus and photographs them with a painterly pigmented saturation.

In the following videos available on YouTube and Vimeo, the viewer gets a glimpse at the process behind Cathleen Naundorf’s extraordinary fashion photographs. 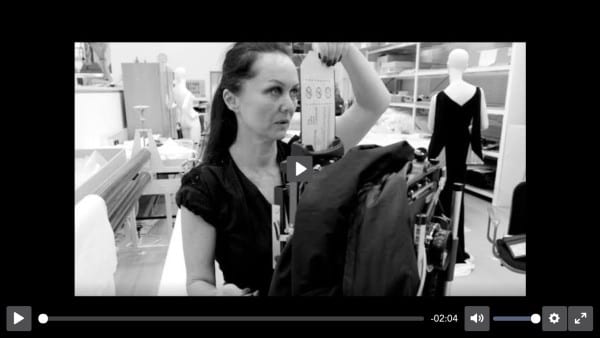 Cathleen Naundorf photographs 1930s French Couture, is a short video made available by the Victoria & Albert Museum. In this video, the V&A invites the artist to use gowns from the museum’s collection to create photographs using her distinctive vision. Naundorf speaks of haute couture and the significance of the museum’s vintage clothes. Additionally, Naundorf explains her thought process while creating pictures that seem capable of transporting the viewer to a different time. 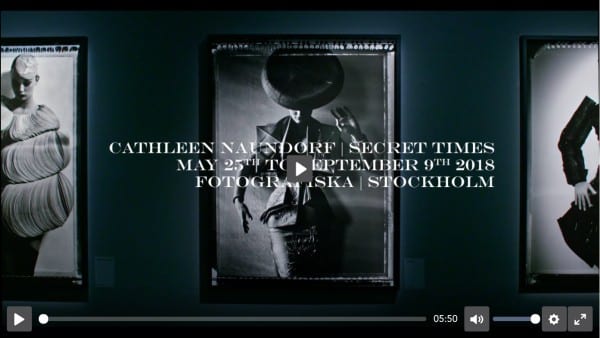 In “Secret Times” Fotografiska Museum, by Moon Man Studios, we see the Fotografiska museum preparing for Naundorf’s haute couture exhibition. The video features the founder of Fotografiska, Jan Broman, and Naundorf, who speak about the creation of the show. This insightful video underlines the technical brilliance and visual fantasy that Naundorf is capable of creating.

Since the 1990s, Naundorf has found a photographic process that is painterly and sculptural and highlights the unpredictable beauty and uniqueness of the haute couture she documents.

She has, up until recently, used an analog large-format camera by Deardorff or Plaubel along with Polaroid material or film. Unlike other fashion photographers who utilize Polaroids as preliminarily visual studies, Naundorf uses them as the final image. After all, she hand prints her black and white photographs as silver gelatin photographs and develops her color pictures as chromogenic prints.

A further defining trademark of Cathleen Naundorf is that she created her unique technique of Polaroid transfer.

This technique gives the print’s surfaces a quality that includes various markings and irregular abraded patches of color. The final photographs are vibrant with the saturated color and particular surface densities that are typical in one of a kind Polaroids. Naundorf deliberately creates a visual patina to suggest the passing of time. The images appear to have had a past life belonging perhaps to a “grand age” of elegance and design. She has found a way of capitalizing on the creations of the Great Masters of 20th-century fashion with an imaginative and unique way of bringing the work to life by also suspending the work in elegant, mysterious, and temporal settings.

She has found a way of capitalizing on the creations of the Great Masters of 20th-century fashion with an imaginative and unique way of bringing the work to life by also suspending the work in elegant, mysterious, and temporal settings.

Cathleen Naundorf was born in the divided Germany of 1968. Her home of Weißenfels was the same hometown as influential photographer and eventual mentor, Horst P. Horst, who she consistently references in her work. Although she grew up in East Germany, Naundorf was able to move to Munich to study painting and photography. She apprenticed as a photographic assistant in New York, Singapore, and Paris. Consequently, she would be commissioned by Glamour and Vogue and quickly become one of their leading fashion photographers. She brought with her a steady sense of intelligence and elegance to the world of fashion photography.

Naundorf’s reputation grew in 2005 when she began her series on haute couture with the cooperation of haute couture houses. She published these images in the book Haute Couture: The Polaroids of Cathleen Naundorf, published by Prestel in 2012. Naundorf worked privately with Valentino Garavani on several projects with some examples published in Harper’s Bazaar, Vogue, W, among others. Her most recent book, Women of Singular Beauty Chanel Haute Couture, is a collaboration between the house of Chanel and herself.

She’s had numerous exhibitions in Germany, the UK, Spain, and the USA. Cathleen Naundorf won the American Photography Award in 2016. She lives in Paris and continues to place her faith in the dramatic power of pure beauty and elegance.

“People often ask me what first inspires me when I get an idea for a shoot…In this case, I had everything: the amazing looks, the models, the idea, and the type of location I wanted, which was a kind of all powder white and completely unique place, but we could not find it. Finally, after three years, we discovered the last ‘stucrateur’ [plasterer] in Paris. It was an atelier du style! I was overwhelmed by the location. Big plaster statues standing around, pieces of antique flowers, casting bowls, old panels, and white dust; my powder everywhere! When I arrived on the day of the shoot, I saw big trucks from the House of Dior because some dresses were so large that they needed whole cars. It was quite fun. La fille en plâtre, The Girl in Plaster, had finally found her place.”

Cathleen Naundorf, the Allure of Beauty