Models backstage, film “Who are you, Polly Magoo?”

Carrying over William Klein’s ironic approach to fashion, his first full-length film that he wrote, directed, and designed was the satire “Who Are You, Polly Maggoo?” Made in 1965 and 1966, it was inspired by his years at Vogue becoming a kind of unsympathetic postscript to his fashion years and the media even including a spoof of Diana Vreeland. In the film, Klein designed and created his own world, reveling in making theater by collaborating on making outrageous and unwearable clothes. Throughout it he overwhelms with constant geometry, Op Art, spirals, emblems, and flags creating an inundation of design motifs that were unique to the time.

The image of models backstage at their dressing room tables taken during the film perfectly unites Klein’s interests of filmmaking and photography at the time. The models function as a part of Klein’s created world with their clothing stripes almost camouflaging them against the same pattern of the background while becoming rather anonymous with their identical geometric haircuts as they gaze at the viewer from within the narrow space. The photographer is seemingly entering a privileged backstage space as he peers over a makeup mirror with light bulbs in the foreground. A mess of makeup is presented by the unique angle Klein sets up from which to capture the models’ intent gazes.

Predating the world’s obsession with supermodels and backstage images of them that Klein continued capturing twenty years later, the photograph still encapsulates a feeling of the mid-1960s with its attention to the graphic qualities of Op Art and the unique aesthetics of the period of change. The film would become a critical success winning France’s Prix Jean Vigo, but Klein always the innovator, would turn his back on mainstream film and continue to create groundbreaking bodies of work over the next decades. 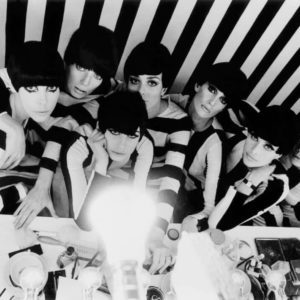