Signed, titled, dated notation in pencil on verso. Penn copyright credit reproduction limitation stamp and stamped ‘signed, silver prints of this negative not exceeding 45’ (on the reverse of the flush-mount).

One of the most influential photographers of the twentieth century, Irving Penn‘s oeuvre spans over six decades across multiple genres united by his signature refined simplicity.

While the foundation of his work is fashion, portraiture, and still life that began in 1943 with his first Vogue cover picture, he consistently expanded his subject matter and method. Penn was a master of reduction and refinement, working in a deliberate way with simple, controllable settings to create timeless images of an ephemeral world. Unlike his counterparts, he was not interested in photography outside the studio, let alone spontaneous shots in streets and cafes. Instead, Penn offered something fixed and contemplative. In his studio images the background is his stage and features prominently across various genres including his seminal ethnographic portraits and fashion images. Penn would detach people or objects from their own social context, isolating them to lend greater attention to their idiosyncrasies. Employing this technique in 1974 for a series, Penn was inspired by Diana Vreeland’s exhibition of Parisian haute couture, “The 10s, the 20s, the 30s: Inventive Clothes” at the Metropolitan Museum of Art.

As he wrote: “When I saw Diana Vreeland’s show…I felt a thrill I had not as a fashion photographer known before. A luxurious clothes-world had once existed (and not so long at that), apparently without concern for cost, where it seemed no material was too expensive to use, no amount of labor too dear to employ, no designer’s fantasy too extravagant to realize. For personal pleasure, I wanted to study these clothes on the ground glass of a camera…The Museum’s staff generously improvised a studio for me in one of their unused galleries where I was able to experience the luxury of slowly and quietly photographing these remarkable clothes which had been conveniently hung on uncomplaining plastic dummies.”

Penn artfully documented these clothes placing them within fashion history by creating a photographic essay of the work from 1909-1939 by such couturiers as Poiret, Chanel, Alix, and Schiaparelli. Perhaps the most successful image to emerge from the series, “Vionnet Dress with Fan,” depicted a 1925 creation by the French couturier Madeleine Vionnet.

As Diana Vreeland boldly stated about this couturier in her text accompanying Penn’s published images, “Vionnet dresses are essential and devoid of trimmings. She is without a doubt the most admired and important dressmaker of the twentieth century.”

Much like Penn’s own refined work, the ice-blue, satin dinner dress lent itself to Penn’s controlled lighting within his signature pared-down studio setting. Casting the mannequin’s head in shadowed silhouette as well as the textured peacock fan, the light and attention settle on the architecture of the deftly cut satin that is draped in harmony with the figure. Penn’s chosen angle and lighting with its cast shadows accentuate the architecture and tactile qualities of the dress, all of which combine to create a timeless and meditative composition perhaps reminiscent of a Greek statue. Both Penn and Vionnet’s work convey an essential simplicity that belies the masterful technique in their creations. It is because of this that both have a revered place within the pantheon of the twentieth century’s most revolutionarily creative minds. 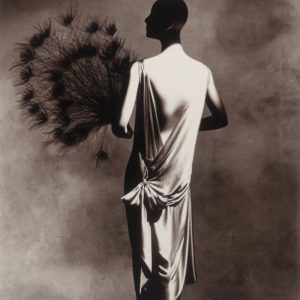